Git’s merge algorithm seems to have inexplicable semantics leading to some interesting cases. I describe a couple of examples below. The bottom line is that:

Note that I distinguish between user commits and merge commits in this post. Assuming that all merges are automerges (i.e., there are no merge conflicts), I expect two branches with same history of user commits to be consistent, i.e., have the same final version.

This example shows that Git automerging leads to inconsistent results. Thus if you and your colleague are working on parallel branches with exact same set of user commits, your code may still have vulnerabilities and bugs that your colleague’s code doesn’t. So you have to independently review your code notwithstanding your colleague’s assurances.

To demonstrate this point, let’s start with a file foo.js containing Javascript/JQuery pseudo-code:

With three branches in place, let us manifest the version control graph shown in the below figure. Vertices in the graph are distinct versions. The diff of each version w.r.t its parent is highlighted. Edges leading to a version are labeled with the Git actions that led to the version. In case of a git commit, only the commit message is shown (in quotes). The actions are numbered, and each action is explained in greater detail below the figure. Each of the three branches is assigned a different color background.

Now take a look at the version graph, and follow the explanation below the figure to understand it.

Actions 1 and 2 fork branches temp1 and temp2 as described previously. Actions 3-9 do the following:

You can see the this example on Github with few minor changes: I used branch main instead of master, and sha256 instead of encrypt.

The final commit histories of main and temp2 are shown below. Observe that both branches have same set of user-generated commits (3e3256, 31001b, 73a645, and 8004f4). The merge commits are all result of Git’s automerge.

In the previous example, branches main and temp2 obtained the same set of user commits, but with different number of pulls/merges. main pulled from temp1 in two steps – first merging the intermediate version, and then merging the final version, whereas temp2 pulled only once – the final version. The inconsistency shows that the granularity of merges matter. I will now describe another example, which demonstrates that the merge result also depends on the order of merging branches. That is, two branches pull the same set of user commits, but still end up with different versions because they pull the commits in different orders. The example also involves a scenario where automerge succeeds, but result doesn’t agree with our intuition.

On each of the four branches, we make distinct changes to foo.js and commit. The four new commits are visualized in the figure below. 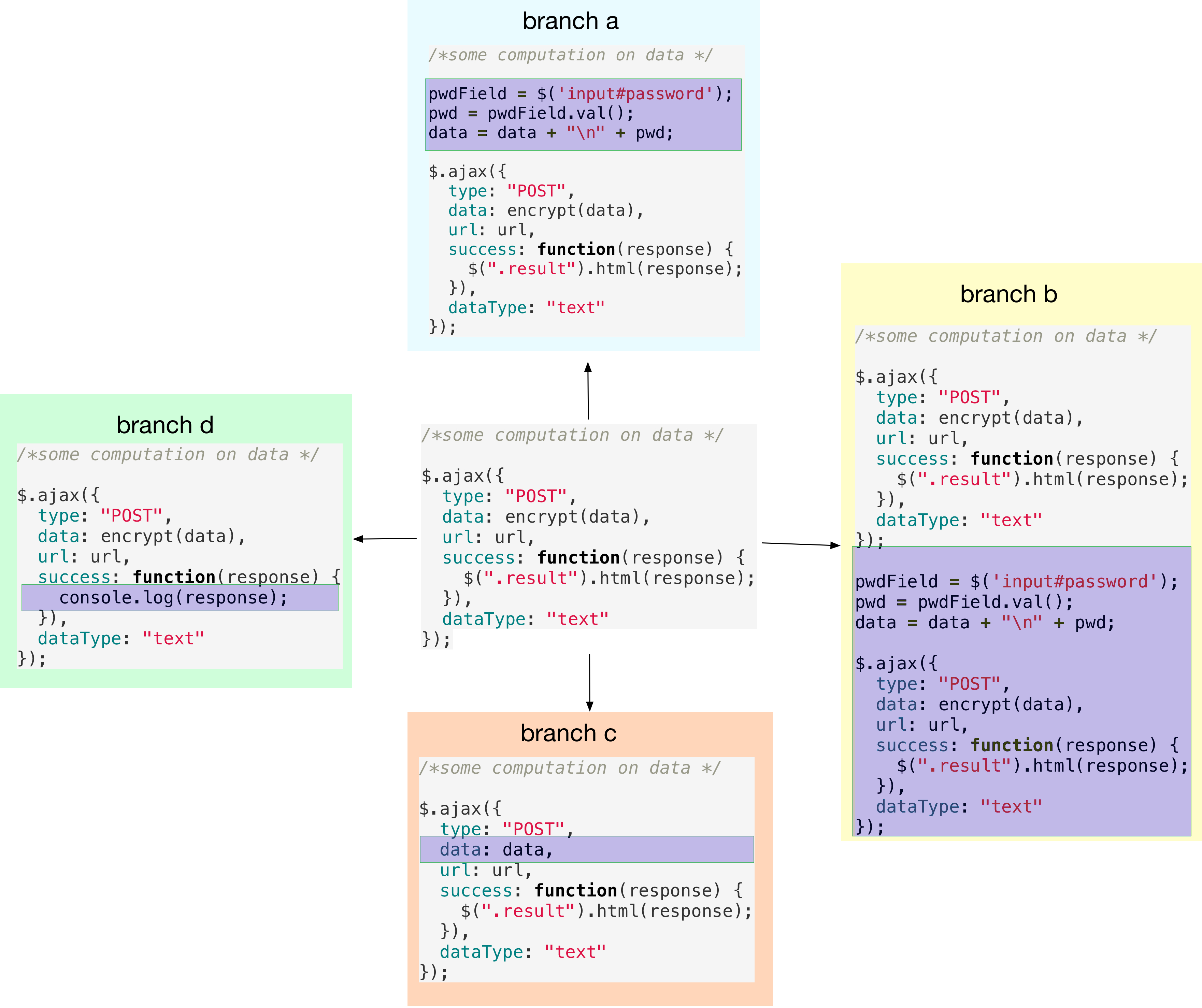 Let us now fork one more branch, temp, from master:

We will now merge branches a, b, c, and d into master and temp in different orders and show that the resultant versions are different.

Merges on master branch are visualized in the following figure. Each labeled edge represents a merge from the corresponding branch (branch heads are shown in the previous figure). As usual, the diff of each version w.r.t its previous version is highlighted. 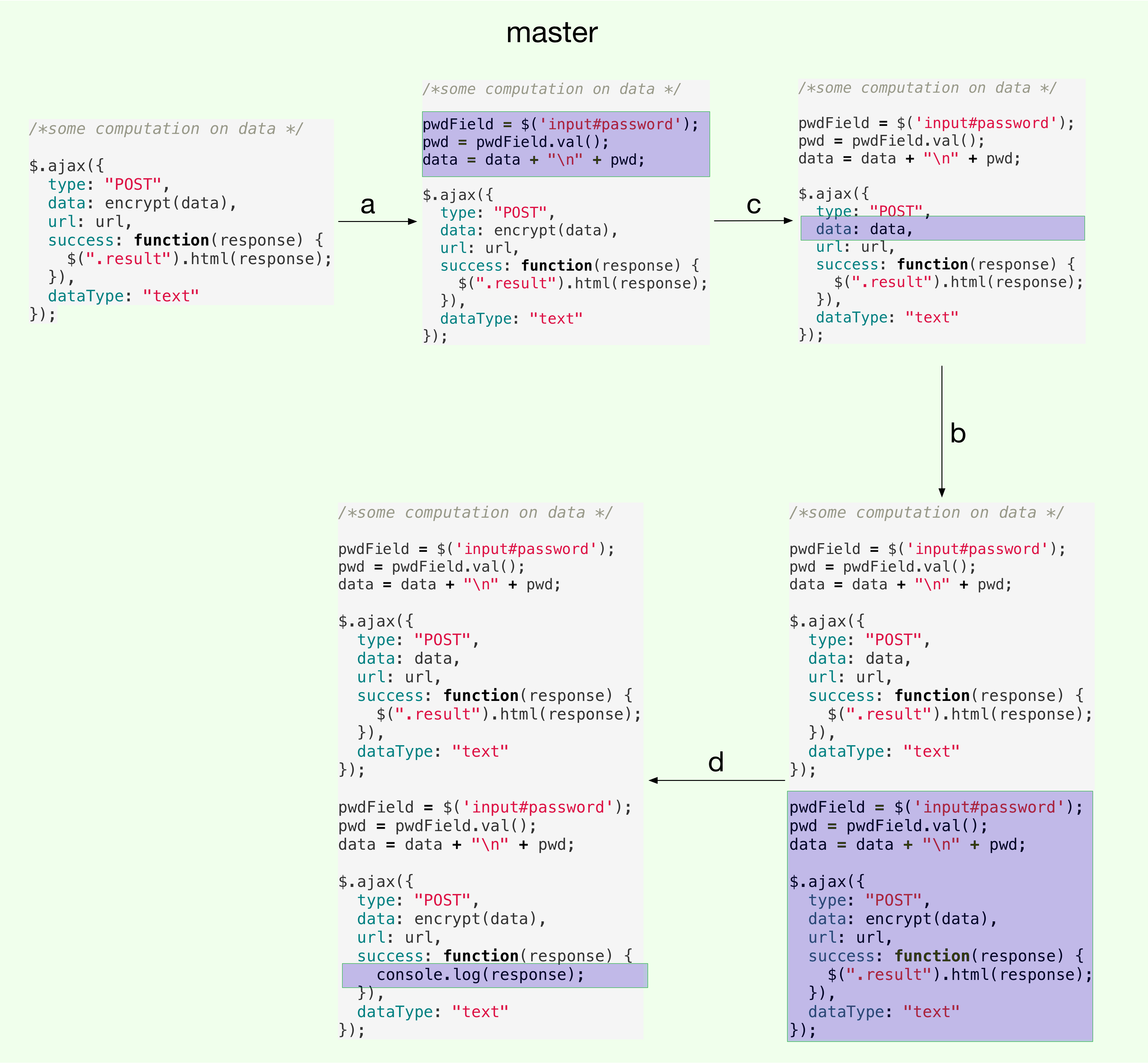 Let us now focus on the temp branch. The merges on temp are visualized below: 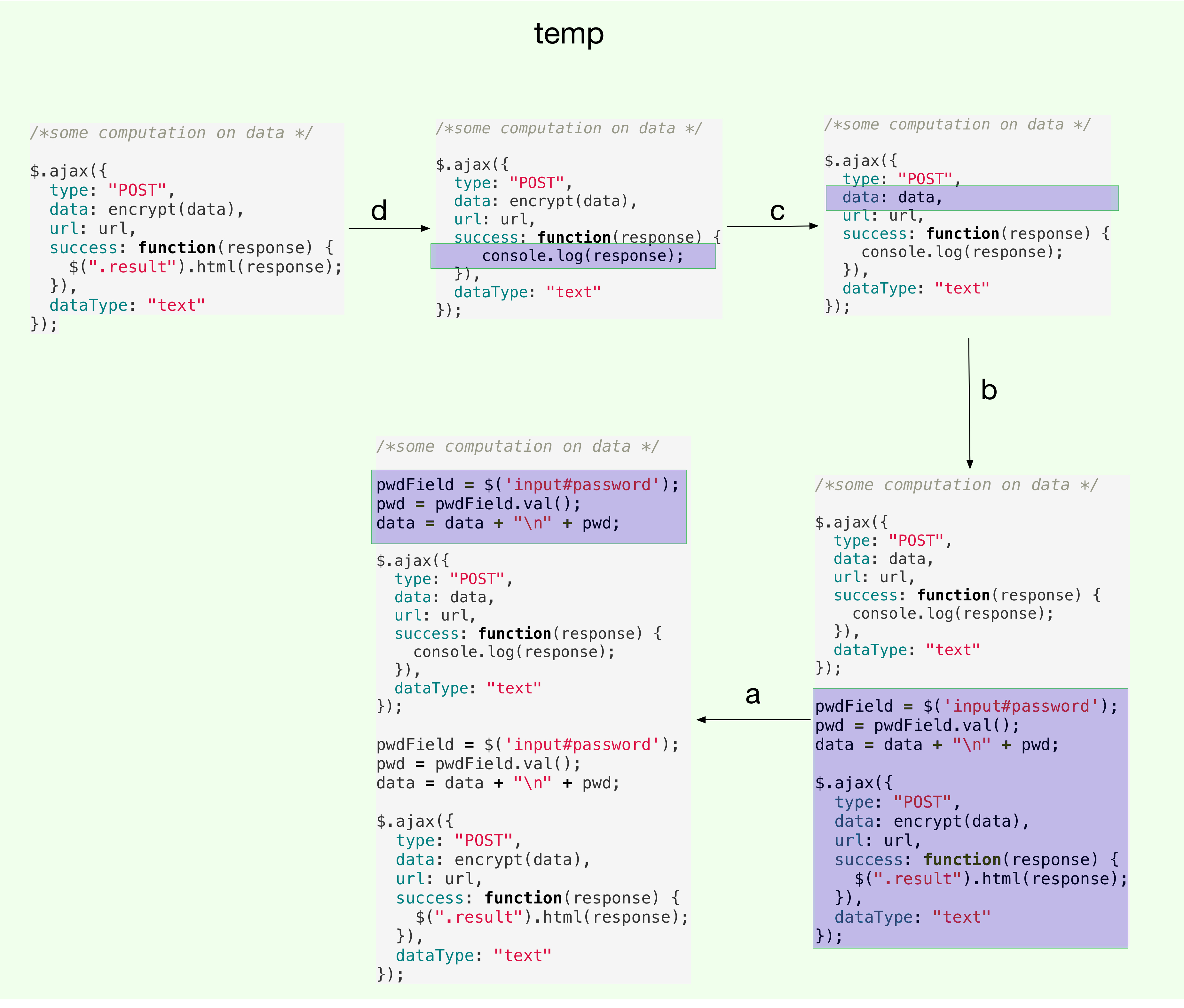 Here again, the result of last merge (from a) is not what I expected. Given that the contents of a are contained inside the the merging temp version in the same order, I expected the merge to be the same as the previous version on temp. The actual result replicates data + pwd logic twice, and I don’t understand why.

Leaving aside the concerns of intuitiveness, one can clearly see that that master and temp have different head versions even as both pulled the exact same versions albeit in different order. This shows that order in which merges are done does matter, which is a bit disconcerting.

This example too is available on Github with minor variations.

The examples above demonstrate that Git merge could lead to inconsistent and unintuitive results. People who understand Git’s merge algorithm can perhaps foresee such behaviors and work their way around them, however that’s not a satisfactory justification for a well-designed system must have predictable behavior based on its interface, not its internals.

PS: If you know a definitive and concise description of Git’s merge algorithm, I’d be grateful if you can drop me a note here in comments or on twitter