One of the most useful features of ML-family languages (OCaml, Standard ML, F# etc) is the type inference. This post contains the notes I took when I was trying to understand the foundational principles of ML type inference.

Let us take a look at the original type inference algorithm produced by Damas and Milner. Their language is lambda calculus with let expression:

Instantiation rule is also subtyping rule, where subtyping is defined in terms of “more polymorphic”:

Since there is no explicit big-lambda expression, generalization rule is important:

There is only one rule to introduce polymorphic type into the context Γ:

Algorithm W is shown below:

Observe that substitutions originate only from unification, which happens during function application. A type constraint is solved immediately as it is generated. We accumulate substitutions as we make progress. We apply pending substitutions to Γ before proceeding to next step.

A Constraint is an equality between two types (i.e., a unification constraint):

The function “constraints” generates a set of constraints to be satisfed for expression e to have type τ under Γ.

The function “action” generates top-level constraints that need to be satisfied for e to have type τ under Γ, and a set of type constraints on sub-expressions.

The function constraints can be defined in terms of action:

The action function for STLC can be defined as following:

Since ML has type schemes, to express constraints that arise while analyzing ML expressions, we need a richer constraint language:

Verification condition is a constraint from above language. It is generated as follows:

HM(X) itself is parameterized over the constraint domain (X). It makes only a few assumption about language of constraints:

The constraint domain can be

The constraint language can also be something, where unification can be reduced to first-order unification.

When we say a set of rules is syntax directed, we mean:

The initial formulation of type inference algorithm in HM(X) has following properties:

Following are the rules: 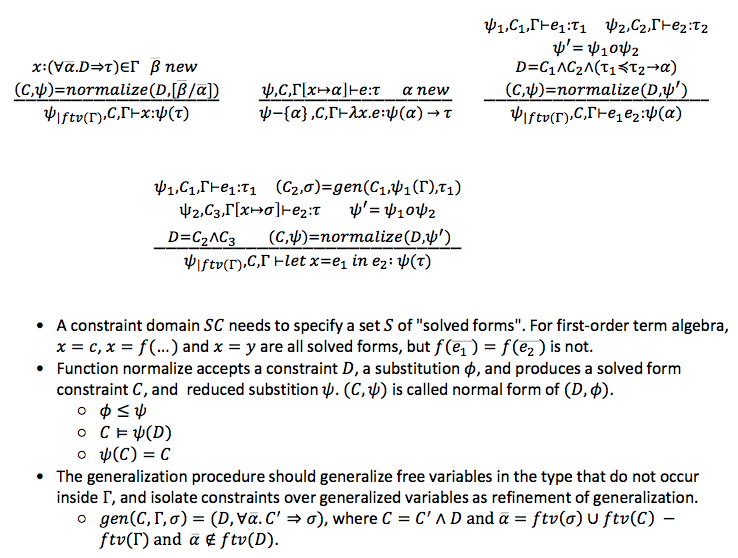